Published by Tom Hall, within the category of Around Scotland

The most romantic day of year approaches. Soon enough, supermarkets, service stations and card shops will become temples of love.

Not real love. Fluffy bear holding a heart love. So cheesy it belongs on a cracker.

As always, the media will demand we buy chocolate, jewellery, red roses and so on. Perhaps some pretentiously named perfume. There’s nothing overtly offensive about this -but it doesn’t shout “I love you”. 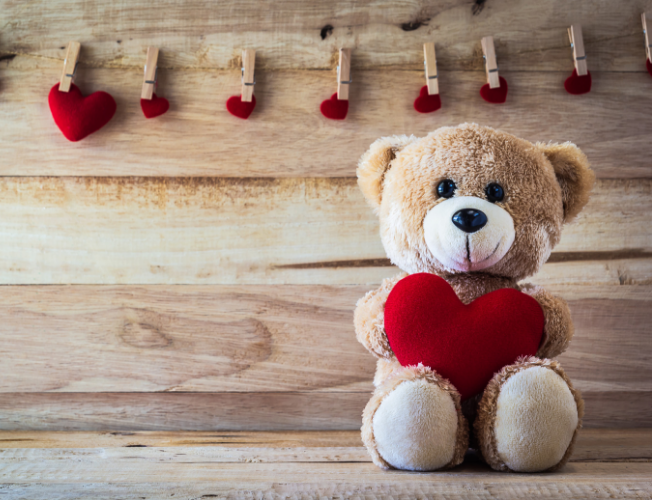 The most romantic times in our relationships, are adventures and experiences. Fancy an engraved keyring or a mountain-top selfie?

Scotland was recently voted by Rough Guides readers as the most beautiful country in the world – fending off the United States, Canada and New Zealand.

There’s no better backdrop for Valentine’s Day than Scotland. Look at these achingly romantic landscapes, and then give in to temptation. 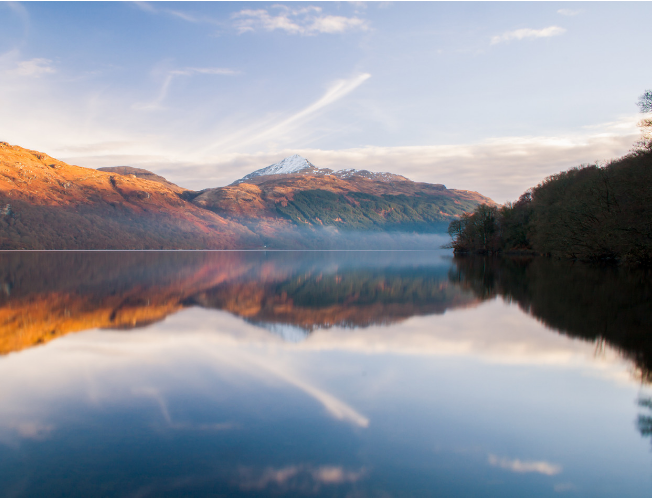 The bonnie bonnie banks of Loch Lomond. It may the setting for a woeful folk song about lost love, but that doesn’t make it any less romantic in real life. Loch Lomond, by surface area, is the largest lake in the UK.

It’s both haunting and beautiful to gaze at cloud shadows gliding over Loch Lomond’s vast waters. Not only this, but the Trossachs – with its secret glens and fairy tale woodland is nearby.

Arm in arm, strolling through a pretty wood – eternally romantic. 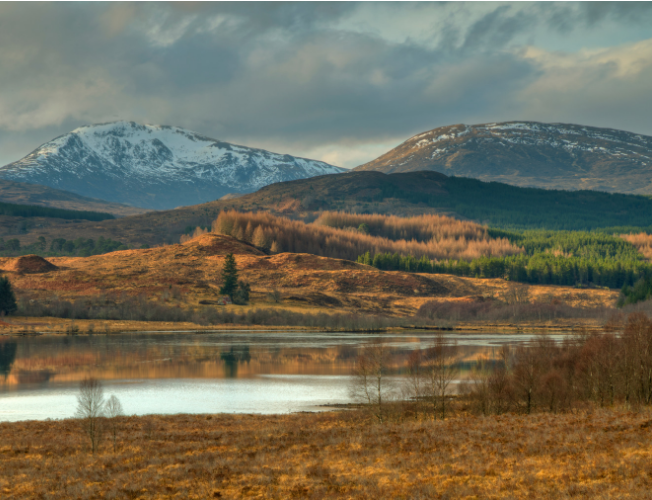 For some, it’s the most attractive part of the country. It’s also the best place in the UK to go skiing (real skiing) and feed reindeer.

Sounds like Lapland doesn’t it? All it needs now is - 50°C temperatures. Hypothermia isn’t romantic, nor is frost bite. Feeding reindeer, however, could be - that’s up to you. It’s different, that’s for sure.

This is one of Europe’s last remaining wilderness areas. A mysterious and rugged land – made for the adventurous, and those who want to get far away from roads and people. Or Horace Donisthorpe, a leading figure in myrmecology (ant science) who was known to collect unusual ants here.

Whilst collecting ants sounds fun, and educational – it’s not what (most) people travel to Scotland for.

They come for the mind-blowing, inspirational scenery. If you’re not up for some heavy trekking, the most romantic way to experience Rannoch Moor is from the comfort of an old-fashioned stream train.

Find out more about the West Highland Line.

The Isle of Skye 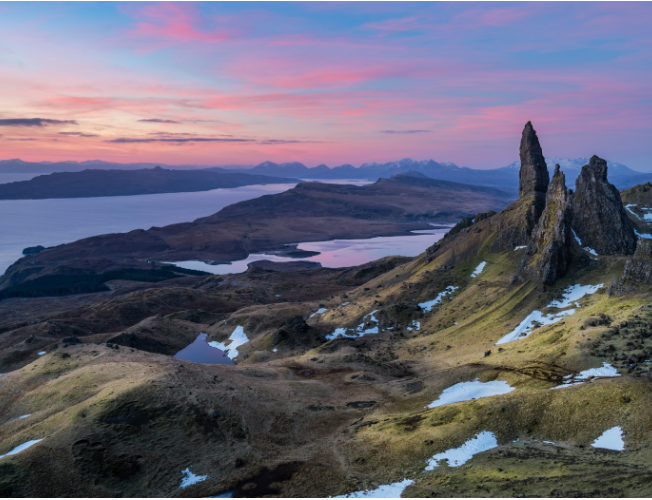 Even its name is ethereal and romantic. It’d be ironic if it wasn’t lovely, but it is. And not just lovely. The Isle of Skye is a fantasy kingdom, with fairy pools to prove it.

Skye is also home to some iconic Scottish photo opportunities, such as the Old Man of Storr – a jagged rock tower, on the hillside above the Bay of Raasay. Seeing it like a black claw mark against the coral ripples of a winter sunset is… 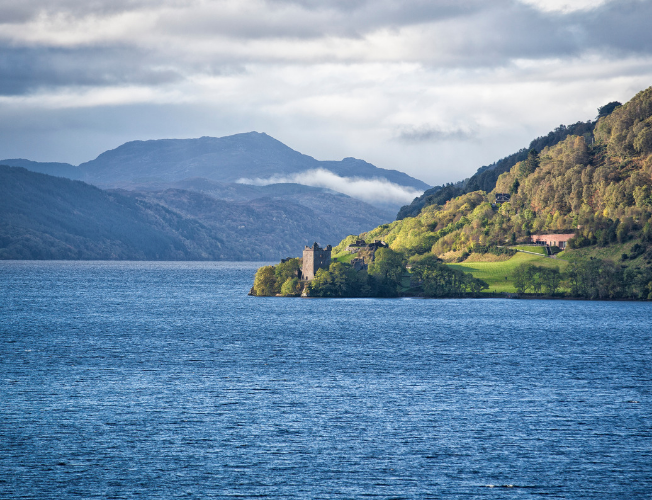 The most famous of all the lochs in Scotland. Loch Ness is a deep old loch, and folklore claims there’s something lurking below its surface. Something with a long neck.

The evidence of the Loch Ness Monster’s existence is, much like Bigfoot, laughable.

Really, Loch Ness is an impressive lake – containing as much water as all the lakes in England and Wales combined. But, it’s not the hiding place of a prehistoric creature, one that's somehow survived since the days of the dinosaurs. Eating what?

Nessie or not, Loch Ness is a gorgeous place to visit. 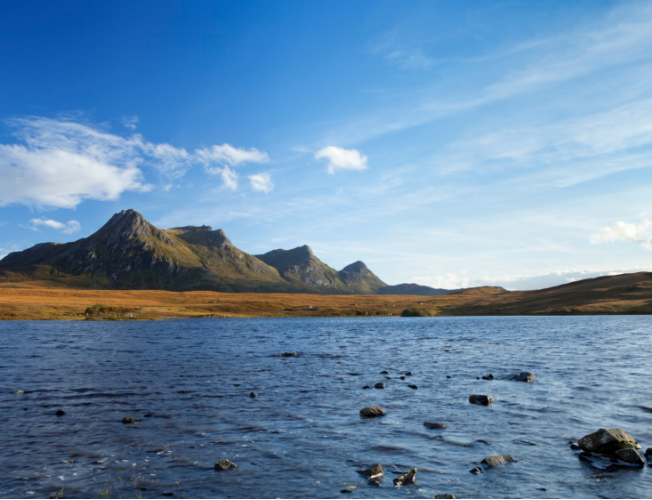 Ben Loyal is a granite giant, rising alone from the Northwest Highlands, south of the Kyle of Tongue, a shallow sea loch.

Despite its masculine name, it’s sometimes known as “the Queen of Scottish Mountains”. There are other, taller mountains in Scotland (Ben Nevis), but Ben Loyal is unique. The way it firmly reaches into the sky without competition. The way its saw-tooth spine contrasts with the wider landscape.

Even if you gaze at Ben Loyal from the window of your car, on the A836 it will have been worth a drive.

The Silver Sands of Morar 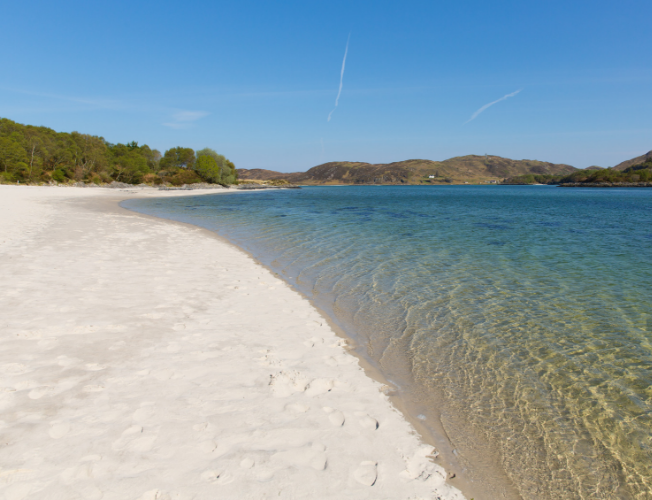 If there were a palm tree or two, the beaches which make up the Silver Sands of Morar could be somewhere tropical. Uncommonly pure and soft.

It’s no wonder this part of the Scotland is a popular filming location. From the coast here, you’ll have unbroken views over the ocean to the isles of Eigg and Rùm. Obviously, Scotland isn’t tropical – so remember to take a thermos. 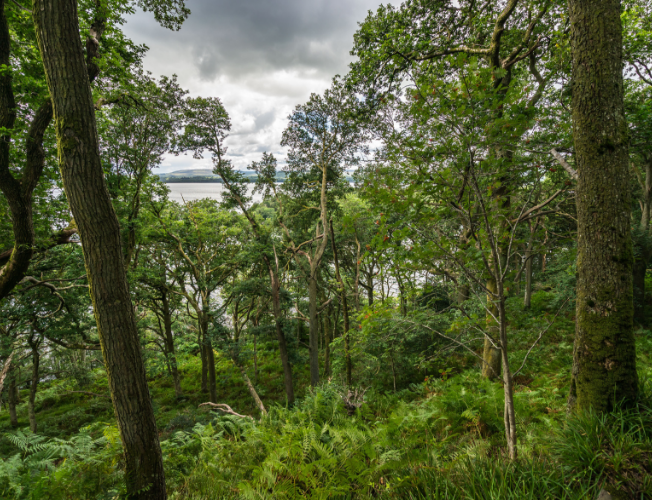 That’s right, rainforests. Scotland is home to some of the rarest rainforest on Earth, known as “Celtic Rainforest” or “Atlantic Oakwoods”.

What makes them special is their old growth trees, heavy rainfall and biodiversity. It sets them apart from your average patch of trees. These are ancient feeling, quiet places – existing where the great Atlantic breathes salt mists inland, over the western coast.

Read our blog on Scottish rainforest. 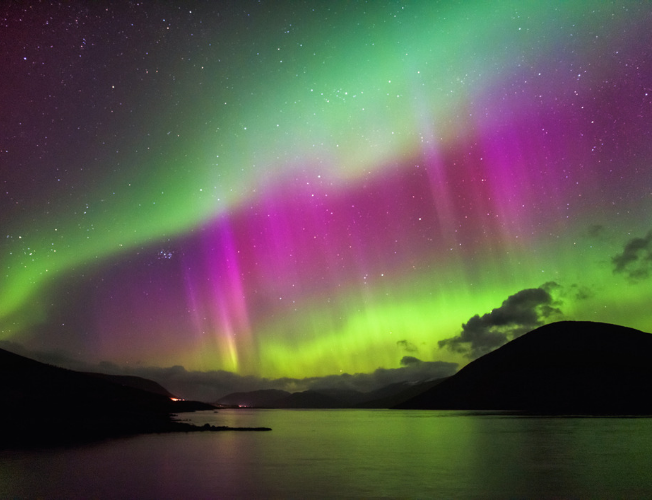 True, this isn’t a landscape. The odd one out. The thing is, witnessing the Aurora Borealis is as romantic as it gets. And, many don’t know you can see the Aurora in Scotland, on a cold, clear night.

Occasionally they’re visible from Edinburgh, but the further north the better.

What is this cosmic phenomenon? It’s a light show, like no other – caused by the electrical interaction of charged particles from the sun and molecules in the upper atmosphere. Did that ruin the mystique?

Why not leave it as an unexplained celestial light show, existing simply for the sake of human wonder. 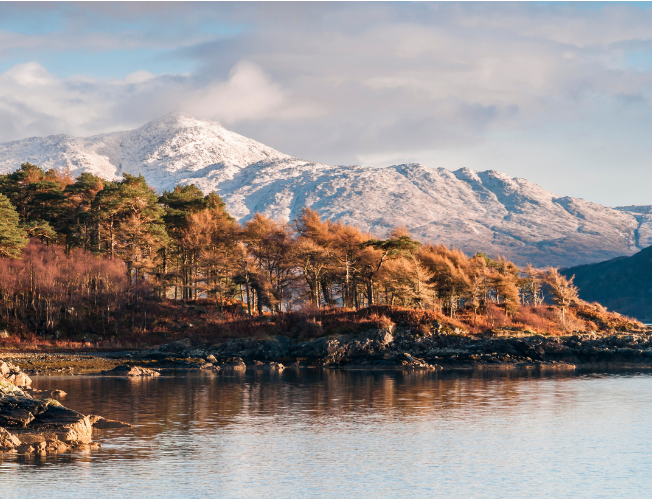 You could visit, not venture elsewhere, and still feel fulfilled in your Scottish experience. And, if you do feel like exploring other parts of Scotland, Ardnamurchan is nicely placed for the North West Highlands and the Cairngorms.

That loch above, framed by snow dusted mountains, is Loch Sunart. Our highland hotel, Kilcamb Lodge is a light stroll from its shimmering surface.

Spend three wonderful nights on the shores of Loch Sunart, with triple AA Rosette fine dining, for only £128.00 per person.