In Gaelic, Adrnamurchan means “headland of the great seas”. It is a 50 square mile peninsula in the west Scottish Highlands, accessed via a single road, with fewer residents than a small town.

Fop some it’s a little remote, and a little too quiet. For others, it’s wildness can be life changing. It’s rare in the UK to discover a place that hasn’t been overrun by human infrastructure.

Ardnamurchan is one of them. No Costa Coffee here.

If you’re after a fast-paced holiday, Ardnamurchan isn’t it. You come to Ardnamurchan to commune with the unfiltered beauty of nature. You come to breathe fresh air and be peaceful amongst the wooded glens and blue lochs of perhaps, Scotland’s most unspoilt land. 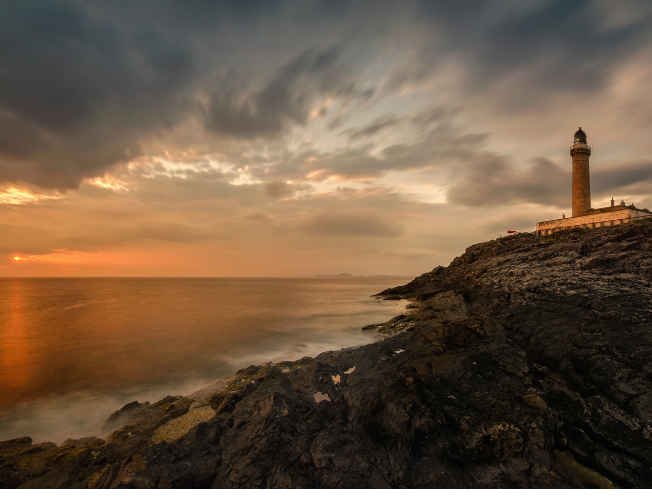 This is a fib, sorry. However, it’s considered to be the most westerly point on the mainland. Much like John o’ Groats is regarded as the most northerly.

When it comes to the most whatever points, there always seems to be a slither of land nearby that trumps it by a metre or two. Or, the phrase “depending on how you measure it” crops up.

It might have something to do with suitability for building a coffee shops and loos. Suffice to say, Ardnamurchan Point is about as far west as you can go without paddling.

The lighthouse here has been beaming out into tempestuous waters of the inner seas since 1849. It was designed and built by the engineer Alan Stevenson, part of a dynasty of lighthouse builders—responsible for building nearly 100 in Scotland and on the Isle of Man.

Alan was part of a trio of brothers, one of whom had a son that decided not to pursue the family business. The brothers were well known for their work, but this son eventually eclipsed them all in terms of fame. The world-renowned author, Robert Louis Stevenson.

The Geology & Landscape of Ardnamurchan 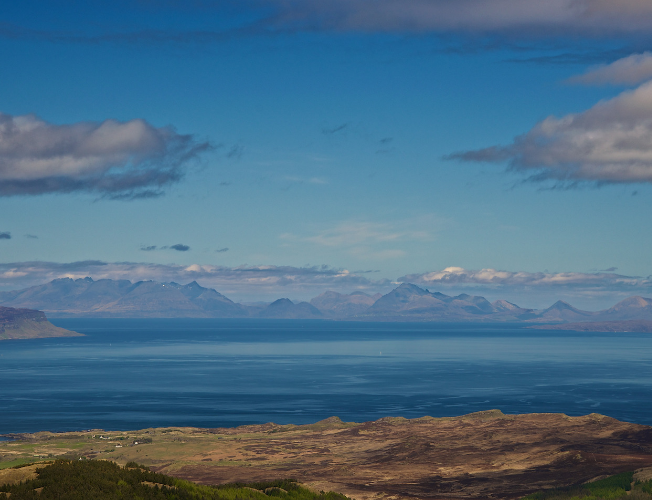 Once upon a time, 60 million years ago there was a colossal tectonic shift. Where once Greenland and Europe were joined, the Earth’s crust split.

In the wake of this extreme event, a string of volcanos rose up. Some of these are on the Ardnamurchan Peninsula. It is these volcanoes, and ice and time which have carved out the rugged topography found here.

Geology is not everyone’s cup of tea, but the moment volcanoes are mentioned: mountains of fire, which have instilled fear and captured our imagination throughout history…

Fortunately, the volcanoes of Ardnamurchan are extinct. No roasting marshmallows; you’ll have to content yourself with the geological wonders which remain. Ancient rock formations, fossils and giant hills, like Ben Hiant. It’s a haven for hikers and landscape buffs. 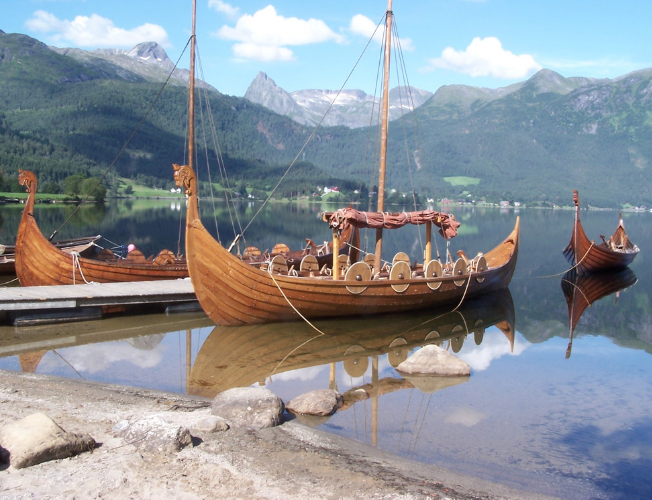 On a bright June day in 793 something happened that marked the start of a violent saga, the likes of which England, Ireland and Scotland had never known.

The abbey at Lindisfarne in Northumberland was destroyed, its passive monks thrown into the sea to drown or forced into slavery and its riches were plundered.

The Vikings had arrived and wouldn’t release their grip until 1066 at the Battle of Stamford Bridge—having finally been expelled by King Harold Godwinson. Unfortunately, less than a month later he was defeated at the Battle of Hastings and the Norman Conquest began.

During the Viking age there were many Norse strongholds in the British Isles including the Arnamurchan Peninsula. It’s lack of access and isolation made it perfect for fortifications and as a place for Viking power to radiate out through the western isles.

The Vikings liked it so much they stayed for half a century. Although their rule ended with a challenge from the formidable Scottish leader known as “Somerled”.

This, however, did not bring peace to Ardnamurchan. Right up until the 19th Century it passed back and forth between bloody Scottish hands.

It’s seems this part of Scotland has always been coveted. The Vikings were but a foot note in Ardnamurchan’s history. There is evidence of settlers dating back 4000 years. 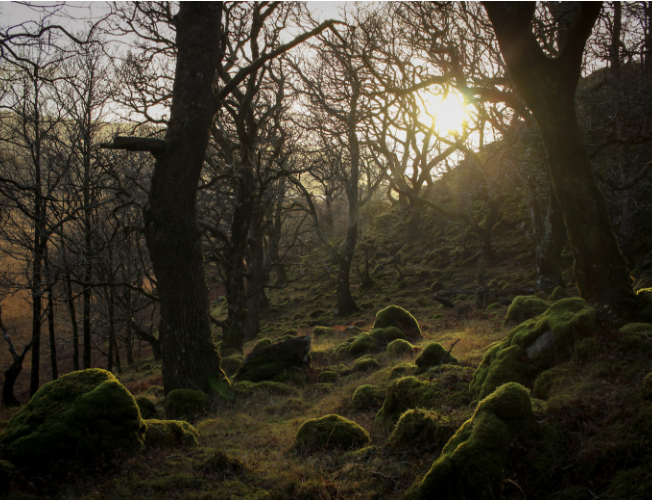 No many know that rainforests occur in temperate environments, like Scotland. The word evokes steamy jungles and chittering multi-coloured birdlife. Monkeys, and so forth.

It doesn’t evoke moss carpeted oak woodlands, draped in lichen. Think Lord of the Rings. The thing is, rainforests are all about biodiversity and…rain. Along the western seaboard of Scotland there are pockets of an ancient woodland dating back to the last ice age.

With sea mists and gulf stream rain, these woodlands stay damp, and support a plethora of wildlife—especially rare lichens.

The Ariundle Oakwood in Ardnamurchan is easily one of the finest examples of temperate rainforest in the UK.  A primeval place, full of secrets and discoveries waiting to happen.

The Diverse Wildlife of Ardnamurchan 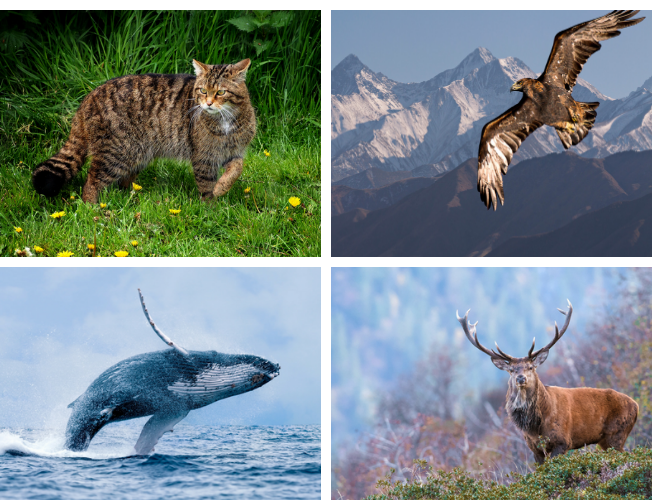 With all these, it’s easy to understand why it’s home to so many of Scotland’s iconic animals. On the same trip you could see whales, dolphins, eagles, red stags, red squirrels, pine martens, otters and highland cows.

If you’re an expert tracker, able to hold your breath indefinitely and can turn invisible, you might even catch a glimpse of a Scottish wildcat. This endangered species has found, much like the Vikings, a stronghold in Ardnamurchan.

In the central highlands, in places like the Cairngorms it’s too busy for wildcats. They need true wildness, and most of all, to be free from human contact and habitat destruction. This makes Ardnamurchan ideal.

Things to Do in Ardnamurchan 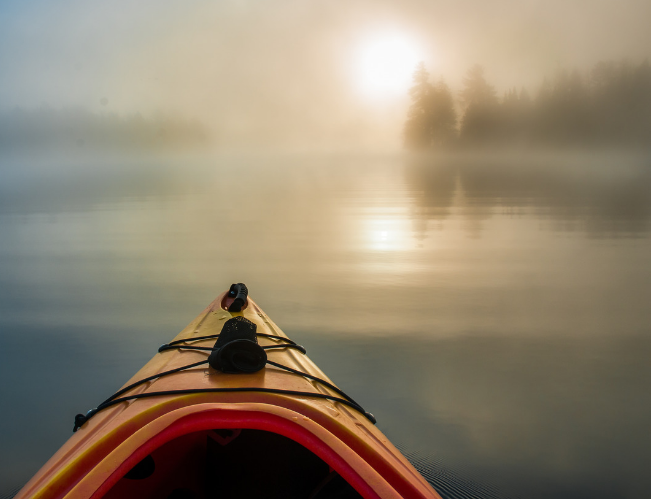 Visiting Ardnamurchan is all about the great outdoors. So, as you can imagine the most popular things to do here include walking, cycling, canoeing and taking wildlife tours.

This is the Scottish Highlands though, so you’ll also find whisky and highlands games.

Not only this, but Adrnamurchan has art, local crafts and some of the best local produce to be found anywhere. In essence: Ardnamurchan is Scotland encapsulated.

Read up on things to do in Ardnamurchan. 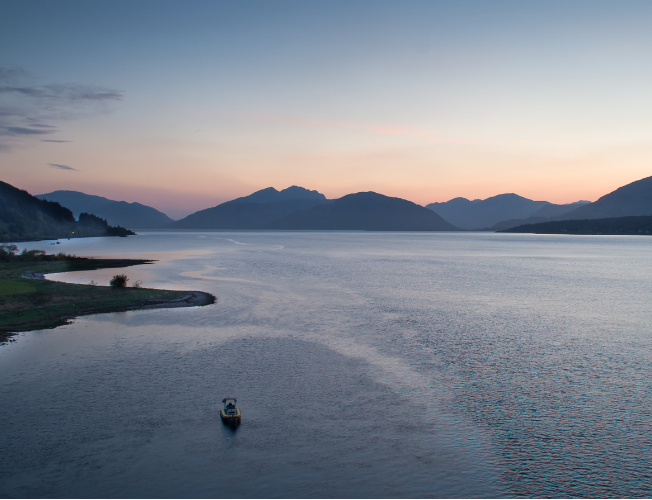 At Kilcamb lodge we’re at the heart of this bounteous, beautiful peninsula—a whisper away from the deep blue waters of Loch Sunart.

We feel proud and lucky to be here, and love sharing our little piece of Scotland with others. But we don’t rest on our laurels. It takes more than a landscape to complete a Scottish escape.

Here, our passion is giving you the most authentic Scottish experience possible. We have 3 AA Rosette fine dining, all manner of superb whiskies, luxury rooms and we're dog friendly.

Think of us as a true romantic treat, but also relaxed and down to earth.