Published by Samantha Urban, within the category of Around Scotland and tagged with Things to do in Scotland, Wedding Venues in Scotland, Scottish Wedding Traditions,

If you are considering a Wedding in Scotland and in particularly, a Wedding venue in the Scottish Highlands, then why not incorporate some of the age-old Scottish wedding traditions into your big day? We have our favourites here for you… 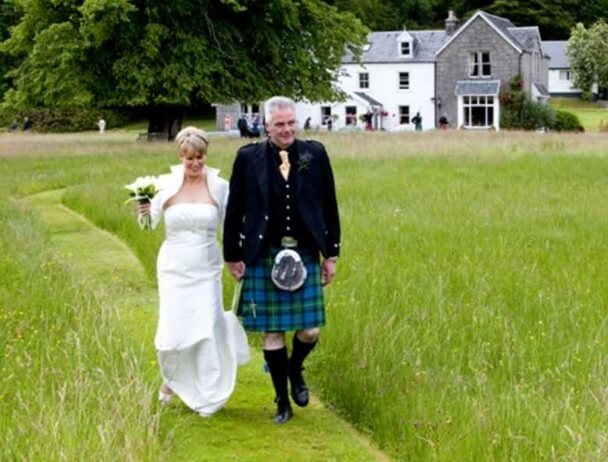 A Sixpence in the Bride's Shoe
A sixpence coin may be placed in the bride's shoe to help bring her good luck, and so that they would always be well off financially in their marriage. Similarly, in the Scottish Borders, a sprig of heather is hidden within the Bride's bouquet.
The Wedding Scramble
As the bride steps into the car, it is a tradition for the father to throw a handful of coins for the children to collect. This practice, called a scramble, is believed to bring financial luck. This also takes place in weddings in Ayrshire but is known there as a 'warsel'.
The Lang Reel
The Lang Reel is a traditional dance which happens in the fishing communities in the North-East of Scotland. The dance sees villagers and the wedding party begin dancing from the harbour, continuing through the village as each couple leave the reel when they pass their home. This continues until the only couple left are the bride and groom who have the last dance.
Traditional Grand March at the Wedding Reception
This spectacular procedure is often the first dance to take place at a wedding. It begins with the bride and groom marching to the sound of bagpipes or a live band. As they march, the maid of honour (or chief bridesmaid) and best man join in, followed by both sets of parents and finally by all willing guests!
Traditional Gifts
In the North-East of Scotland, it is traditional for the best man to give the happy couple a clock whilst the maid of honour gives a tea set.
Feet Washing
The custom of feet-washing still happens throughout Scotland and it is hoped that it will guarantee good fortune for the marriage. The bride sits on a stool while an older, married woman washes and dries her feet. In Fife, however, only a few, heartened bridegrooms go through the traditional procedure, which involves sitting in a tub of water while his legs are smeared with grease, ash and soot.
Creeling
In the South of Scotland, a married couple are 'creeled' as they leave the church. Two people at either side of the door hold a fishing basked which is tied with a ribbon across the door. The newlyweds then cut the ties and the basket falls to the ground. It is hoped that this tradition will bring health and prosperity to the couple.
The Bride's Cog
Wedding cogs are vessels from which ale is consumed at Orcadian weddings. These cogs were undoubtedly the most essential of all the ingredients that made up an old island wedding whilst still being a prominent feature today.
The exact mixture which now goes into the cog varies with every wedding, as each family tends to have its own views on the correct recipe. Despite the family variations, the base ingredients of this potent alcoholic mixture are usually hot ale, gin, brandy and whisky mixed with sugar and pepper.
The cog is firstly drank by the bride before being passed around the hall, constantly being replenished so that nobody goes dry!
A 'Second Night'
A 'second night' is normally held the night following a wedding - where people can enjoy another night of drinking and dancing!
Fancy adding any of these into your Scottish Wedding? If you are looking for Wedding venues in Scotland, look no further than Kilcamb Lodge. This picturesque hotel is perfect for weddings of all sizes, and will be happy to include your Scottish Wedding traditions!
For all the latest news, offers and competitions, follow us on Facebook and Twitter!
Email Signup