10 Awesomely Beautiful Places to See in the Scottish Highlands

It’s no secret that Scotland is beautiful, especially the Highlands. It’s a beauty that’s hard to describe though.

You see, Scotland is that type of infuriating place that’s achingly attractive, in a rugged, existential, transcendental, tear in the eye – words elude sort of way.

In 2017 the readers of the influential travel guide “Rough guides” voted Scotland as “the most beautiful country in the world”. This is (clearly) a big deal, and it’s well deserved. Below is some hard evidence for you. 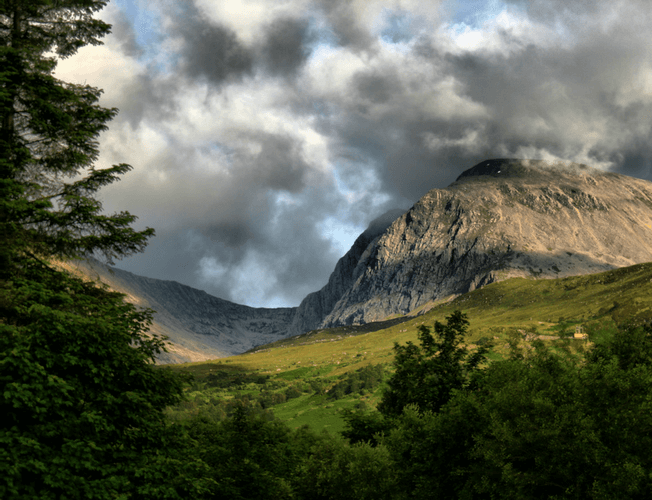 When it comes to Scotland – Ben Nevis is not another mountain. It’s THE mountain. The tallest peak the UK – 1,345 metres above sea level.

Ben Nevis couldn’t be any more dramatic, with a summit often veiled by clouds, and dustings of pure white snow. Once an enormous active volcano, it's now a silent giant watching over the glacial valleys and lochs of the land. 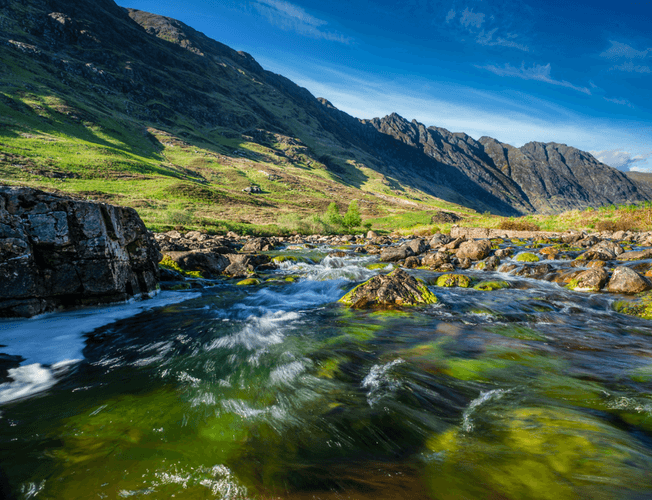 Glen Coe is Scotland’s most famous, and most romantic glen.

Some landscapes are worthy of a postcard, but not a blockbuster film. Glen Coe on the other hand is truly filmic and featured in one of the Harry Potter films. Its awe-inspiring scenery and Machiavellian history has long been an inspiration for creatives, and to visit is life enriching. 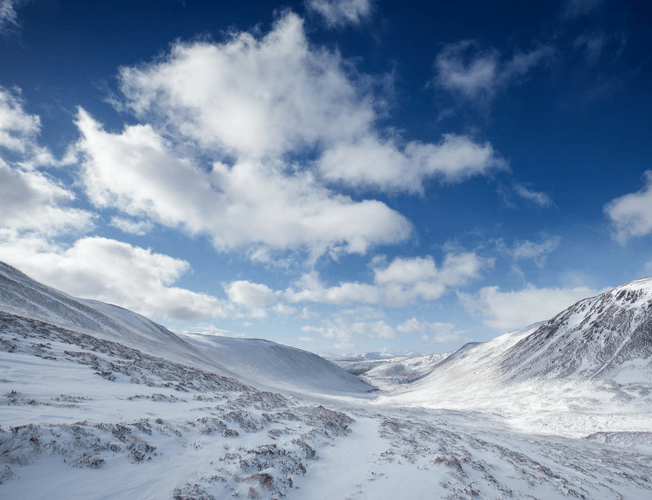 The Cairngorms is the UK’s largest national park (twice the size of the Lake District), reaching from Aviemore in the North to the Angus Glens in the south. It’s also home to five out of six of the highest peaks in Scotland. How greedy.

The landscape in the Cairngorms is diverse; with mountainous horizons, pristine rivers, heather flushed moors, deep forests and wetlands. The climate here, as it’s up to 1200 metres above sea level in places, is arctic-alpine. This means, obviously, it gets cold and the lowest temperature ever recorded was -27.2 °C. It also means the Cairngorms is home to artic wildlife species such as snow buntings.

Remember to dress up warm! 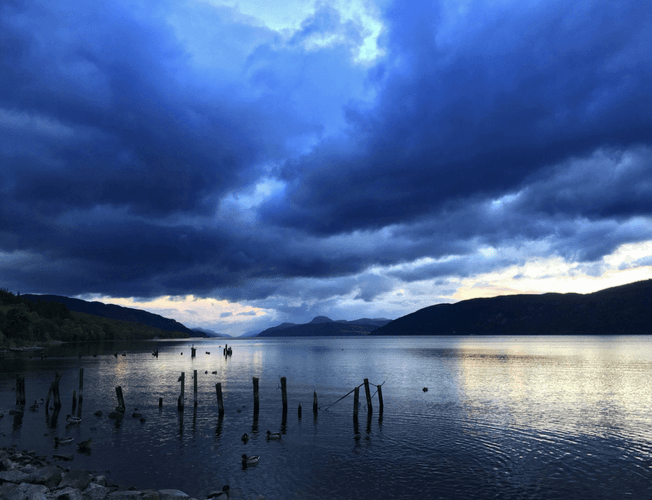 We’ve all heard the stories and seen his-res black and white photo that later turned out to be a hoax. A plot twist no one was expecting…

Anyway, whatever your thoughts on the mythical “Loch Ness Monster” (Nessie) the loch doesn’t need folklore to make it worth visiting. It’s a lovely place. It extends for twenty-three miles, and is surrounded by picture perfect scenery, and quaint villages.

Loch Ness plummets to a depth of 230 metres at its deepest point. This makes it the deepest loch. When you consider that…could something be hiding down there? Fish. Yes, fish. 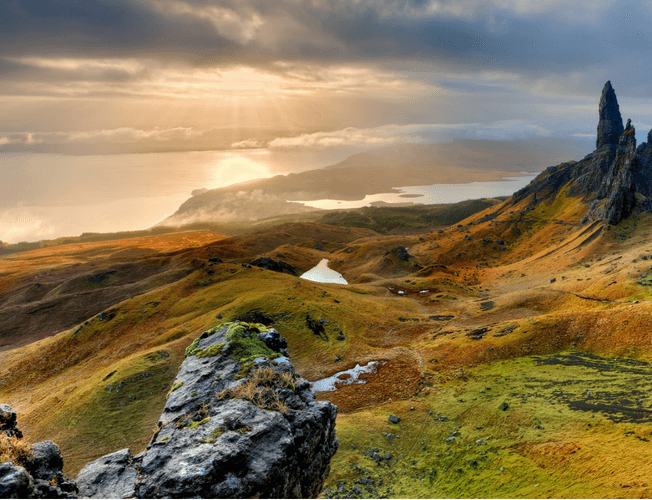 The majestic, yet rugged Isle of Skye recently topped the Rough Guides list as the most beautiful place to visit in Scotland, in the (now) most beautiful country. How’s that for beauty?

Its name is derived from old Norse and could mean “Isle of Cloud”. This mysterious, and almost divine name is fitting for a place like Skye.

Of course, Loch Sunart is pretty. Very pretty in fact. However, there are many pretty lochs in Scotland. So why would you visit Loch Sunart over another?

Well, Loch Sunart (unlike some) is a sea loch. This means, it’s the perfect starting point for wildlife watching; puffins, whales, dolphins and more. Dolphins even swim miles inland here.

You may not agree, but Dolphins leaping make any body of water prettier. 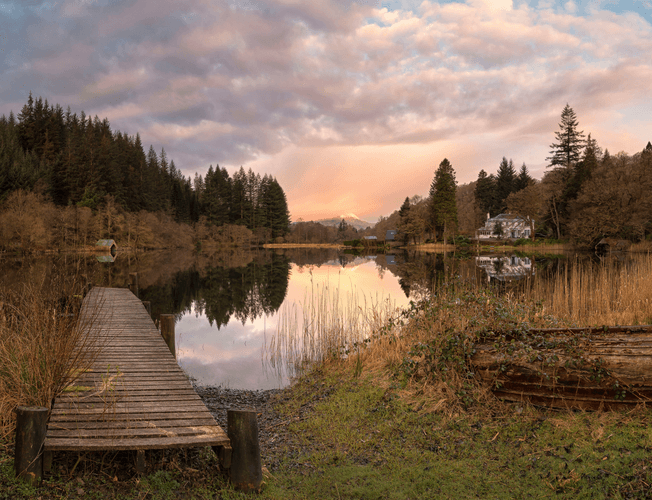 It would be easy to include Loch Lomond here, the popular loch from Scottish song – but instead let’s touch on the Trossachs. Although they form a national park with Loch Lomond, the lands to the east are sometimes overlooked as a destination.

The Trossachs has twisty woods – carpeted with Scottish bluebells in spring, secret glens and wonderful little lochs. Visiting here, you’ll think you’ve walked into the pages of a fairy tale. 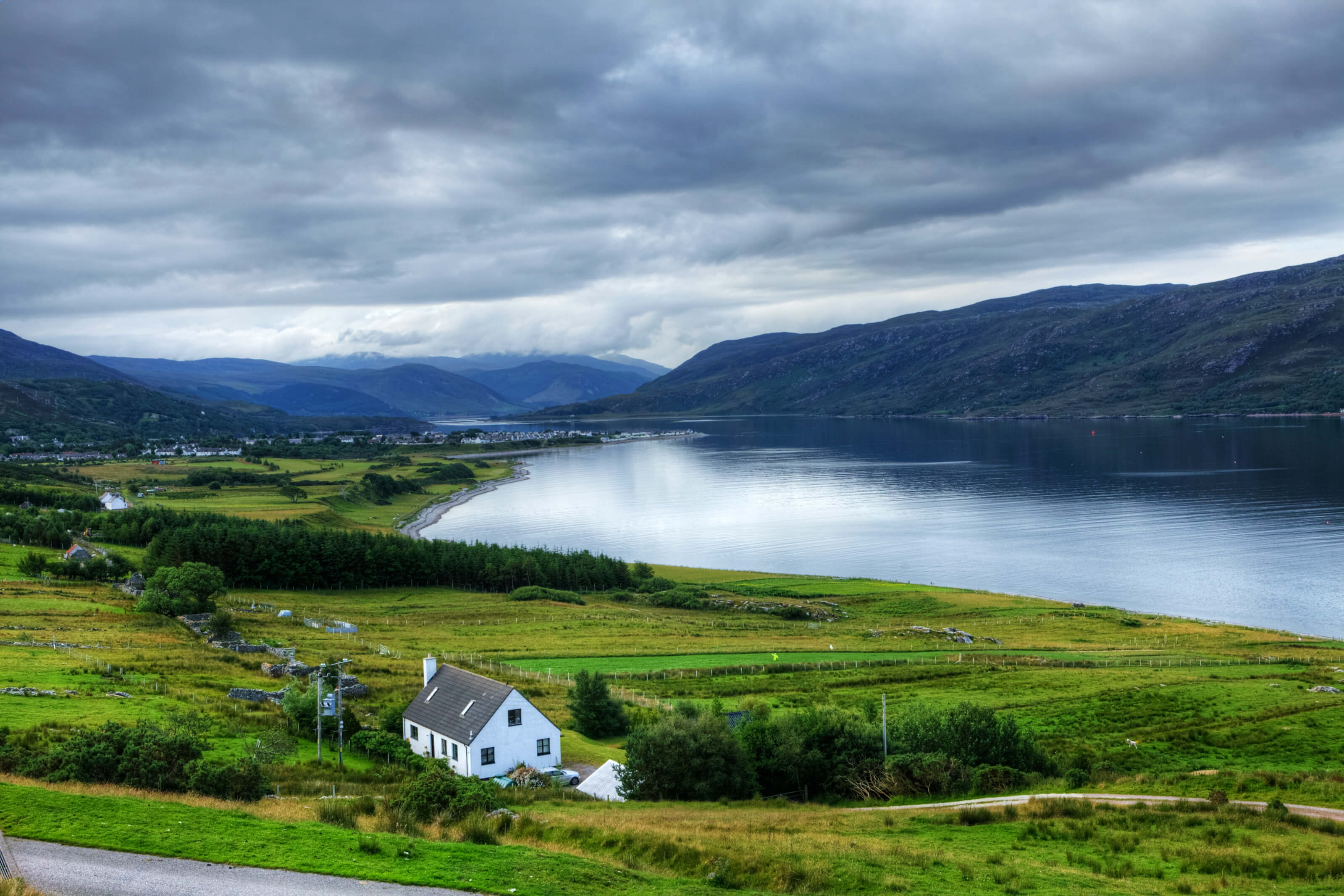 Ullapool, on the banks of Loch Broom sits at the edge of the Northern highlands. It is the last point of true civilisation before the rough country unfurls in all it’s bleak and lonely splendour.

If you were to picture a traditional Scottish fishing town, with pastoral crofts, and fishing boats nipping in out of port, laden with fresh langoustines you’d be picturing Ullapool. It’s a real life romantic fantasy. Although, strangely (and brilliantly) it’s also a centre for the arts.

Loopallu festival (read it backwards) takes place here annually and has attracted bands such a Mumford & Sons, The Levellers and Paolo Nutini. 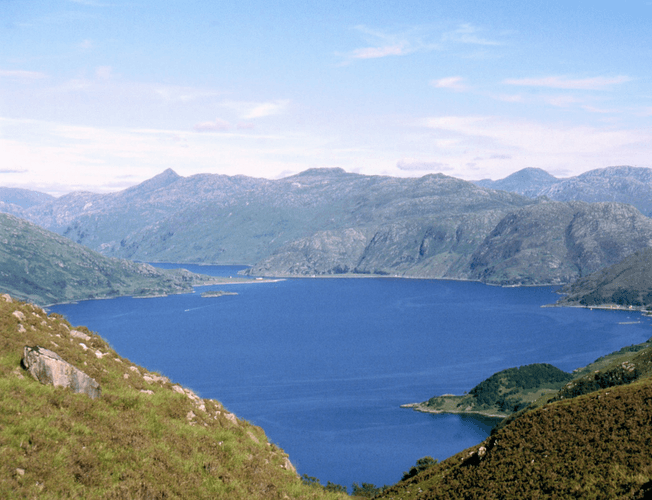 If you want to experience the majesty, and blissful solitude of Loch Nevis you’ll need to either hop on a boat or trek.

This isn’t something we’re used to in the British Isles. There’s always a road. Not this time. Loch Nevis is at the southern border of the Knoydart Peninsula, where there are no roads. One of the last true wilderness areas in Europe.

Although it’s not all that accessible, except for the intrepid – even if you’re unable to reach it…it’s comforting to know that there are still areas in the UK untouched by human infrastructure. 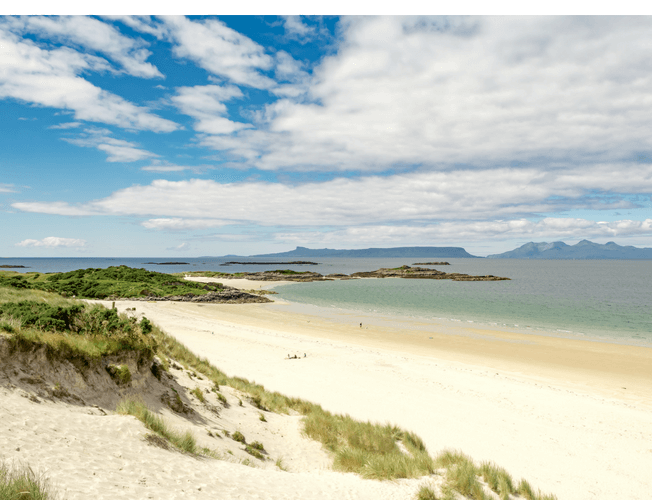 A beach to rival the best in the world. Camusdarach beach, celestial in its pureness, sit across the waters from the craggy mountains of Skye.

It’s the ideal place to escape the incessant buzz of society and relax, with breath-taking views and the sonorous roar of the waves.

Also, if you’re a fan of the film Local Hero you’ll be pleased to know this was the beach used for filming. 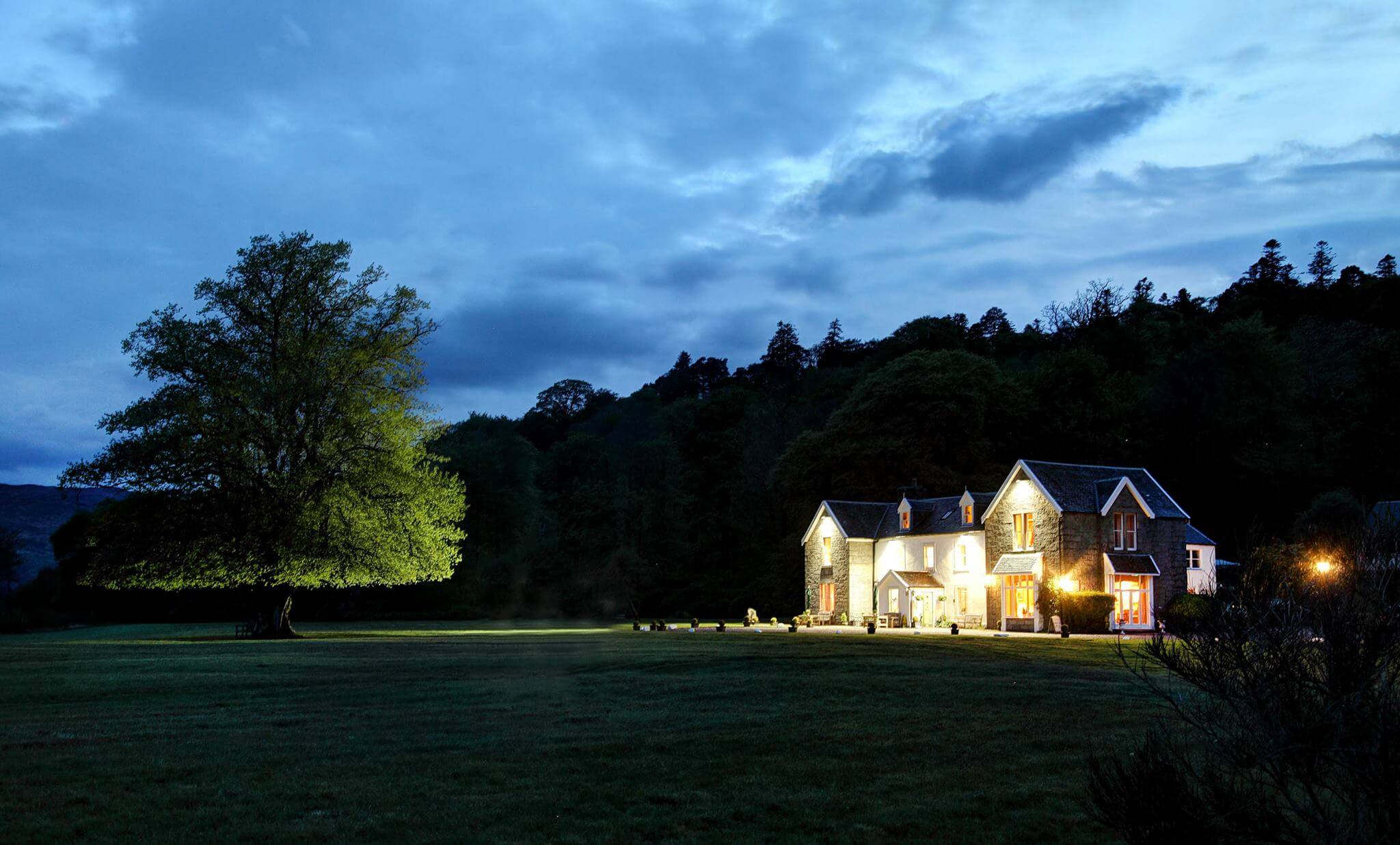 Exploring these sublime locations should be top of your bucket list, in which case Kilcamb Lodge on the shores of Loch Sunart is where you should begin.

A four-star country house hotel, with a 2 AA Rosette restaurant, right on the cusp of the Scottish Highlands. It doesn’t get any better.